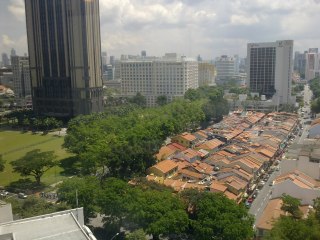 Effective on 1 Jan 2011, Singapore’s Accounting Standards Council requires that revenue be recognised when control of a property has passed on to the owner. Thus previous year’s figures have to be restated to allow for fair comparison. (Yes, this is additional work for everyone involved in the preparation of financial reporting.)

The purpose of this article is an attempt to understand the possible impact of the standard change to a company in the business of property development and management such as CapitaLand.

Quantify the change
Here are the figures reported by ST April 27, 2011 on CapitaLand’s performance for quarter ended March,

The share price has hardly moved on the reporting. Edgar would like to speculate on possible reasons.

Efficient market hypothesis that we learned in class stated we assume the market is semi-strong in terms of efficiency in the share price reflecting all past, currently and publicly available information. Has the market been able to quantify the possible impact on CapitaLand’s bottomline since the announcement of its new standard adoption last year?

The lack of reaction to the strong figures could be due to other news, prevailing in the market, that are distracting the investors. Since the completion of the Election, property sector has been deemed to have been earmarked for radical changes deemed not conducive for investors.

Taking the more pessimistic stand, we should question whether investors understand the impact of the change in accounting standard. This was highlighted to me by an industry veteran who was very wary of earnings volatility due to the change in standard. The uncles and aunties type of investors may sell their shares unnecessary when a property firm is reporting losses in the current year due to “deferred” recognition of sales revenue and profit.

We await for more clarity.