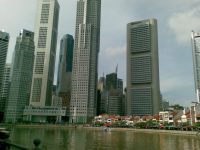 I am naturally curious to read on for the cause of the massive loss and that being the 2nd loss in the last 40 years. Here are the info that I reaped STRICTLY from the articles from Business Times and Straits Times on Friday last.